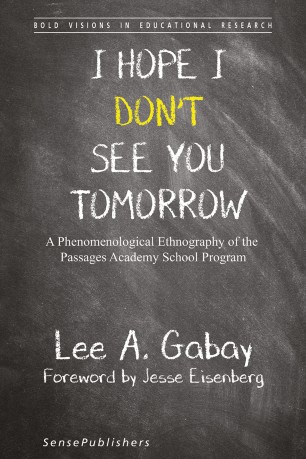 I Hope I Don’t See You Tomorrow

A Phenomenological Ethnography of the Passages Academy School Program

This book explores education for juvenile offenders in relation to Passages Academy, which is both similar to and representative of many school programs in juvenile correctional facilities. Examining the mission and population of this school contributes to an understanding of the ways in which the teachers think about and ultimately act with respect to their detained juveniles students, and particularly illustrates how the tension between punishment and rehabilitation is played out in school policies and design. By calling attention to the decisions that surround juvenile detention education, the extant research concentrates on three main areas: first, the social, political, and pedagogical forces that determine who enters the juvenile justice systems; second, how these court-involved youths are educated while they are in the system; and third, the practical problems and the social justice issues youths encountered when transitioning back to their community schools.
“I Hope I Don’t See You Tomorrow is both heartwarming and heartbreaking: its vast empathy for the students that L. A. Gabay teaches is edifying, while its unsparing examination of the forces that push youth into detention is soul shearing. Gabay is at once Tocqueville and Kozol: he brilliantly guides us through the educational territory that is foreign to most of us, even as he paints a searing portrait of teachers who shape lesson plans for students who must learn under impossible conditions. Gabay’s haunting and eloquent missive from the front lines of pain and possibility couldn’t be more timely as the nation’s first black president seeks to lessen the stigma of nonviolent ex-offenders in our society. Gabay’s book confronts the criminal justice system at its institutional roots: in the economic misery and racial strife of schooling that compounds the suffering of poor youth as they are contained by a state that often only pays attention to them when they are (in) trouble. Gabay opens eyes and vexes minds with this stirring and sober account of what it means to teach those whom society has deemed utterly expendable.” – Michael Eric Dyson, author of The Black Presidency: Barack Obama and the Politics of Race in America
“As a beneficiary of Lee Gabay and his colleague’s patience, discipline, and compassionate teaching at the school, this timely book beautifully decrypts the pedagogical framework within the juvenile justice system. As America comes to term with its zeal for incarceration, policymakers, educators, government officials, parents and advocates should take advantage of this carefully written book and use it as reflection and pause as we prepare our young court-involved students towards adulthood.” – Jim St. Germain, Advisory counsel on President Obama’s Taskforce on Police & Community Relations and Mayor Bloomberg’s Close to Home initiative