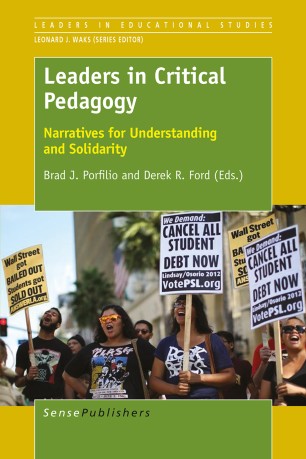 Narratives for Understanding and Solidarity

Part of the Leaders in Educational Studies book series (LES)

Critical pedagogy has variously inspired, mobilized, troubled, and frustrated teachers, activists, and educational scholars for several decades now. Since its inception the field has been animated by internal antagonism and conflict, and this reality has simultaneously spread the influence of the field in and out of education and seriously challenged its status as an integral body of work. The various debates that have categorized critical pedagogy have also made it difficult for younger scholars to enter into the literature. This is the first book to survey critical pedagogy through first-hand accounts of its established and emerging leaders. While the book does indeed provide a historical exploration and documentation of the development of critical pedagogy as a contested and dynamic educational interventionas well as analyses of that development and directions toward possible futuresit is also intended to provide an accessible and comprehensive entry point for a new generation of activists, organizers, scholars, and educators who place questions of pedagogy and social justice at the heart of their thinking and doing. Martin Heidegger once said that Aristotles life could be summarized in one, short sentence He was born, he thought, he died. Porfilio and Fords brilliantly curated compilation of autobiographical sketches of leaders in critical pedagogy resolutely rejects Heideggers reductive thesis, reminding us all that theory is grounded in the historical specificities and material contradictions of life. For those well acquainted with critical pedagogy, these theoretical memoirs grant us a unique and sometimes surprisingly intimate glimpse into the lives behind the words we know so well. But most importantly, the format of the book is an educational intervention into how critical pedagogy can be taught. While it is often the case that students find critical pedagogy dense, inaccessible, and seemingly detached from the everyday concerns of teache