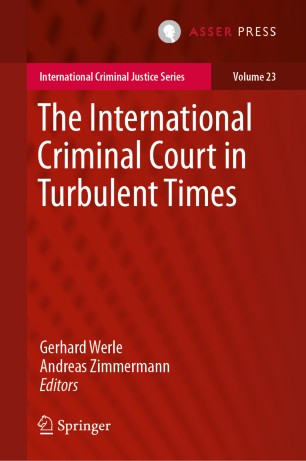 The chapters in this book are reworkings of presentations given during a conference held in 2018 at the German Embassy to the Netherlands in The Hague on the occasion of the 20th anniversary of the adoption of the Rome Statute. They provide an in-depth analysis of major points of contention the International Criminal Court (ICC) is currently facing, such as, inter alia, head of state immunities, withdrawal from the Rome Statute, the exercise of jurisdiction vis-à-vis third-party nationals, the activation of the Court’s jurisdiction regarding the crime of aggression, as well as the relationship of the Court with both the Security Council and the African Union, all of which are issues that have a continued relevance and carry a particular controversy.

The collection provides insights from both practitioners, including judges of the ICC, and diplomats who participated in the negotiations leading to the adoption of the Rome Statute, as well as well-known academics from various parts of the world working in the field of international criminal law.

The aim of the book is not only to inform and stimulate academic debate on the topic, but also to serve as an instrument for lawyers involved in the practice of international criminal law.