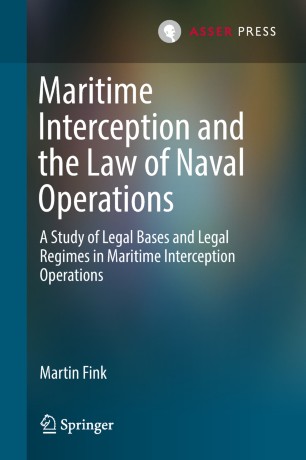 Maritime Interception and the Law of Naval Operations

This book considers the international law applicable to maritime interception operations (MIO) conducted on the high seas and within the context of international peace and security, MIO being a much-used naval operational activity employed within the entire spectrum of today's conflicts.
The book deals with the legal aspects flowing from the boarding and searching of foreign-flagged vessels and the possible arrest of persons and confiscation of goods, and analyses the applicable law with regard to maritime interception operations through the legal bases and legal regimes. Considered are MIO undertaken based on, for instance, the UN Collective Security System (maritime embargo operations), self-defence and (ad-hoc) consent, and within the context of legal regimes various views are provided on the right of visit, the use of force and the use of detention.
This volume, which has contemporary naval operations as its central focus and structures the analysis as a sub-discipline of the international law of military operations, will be of great interest both to academics, practitioners and policy advisors working or involved in the field of military and naval operations, and to those professionals wanting to learn more about the international law of military operations, naval operations, and the law of the sea and maritime security.
Martin Fink is a naval and legal officer in the Royal Netherlands Navy.