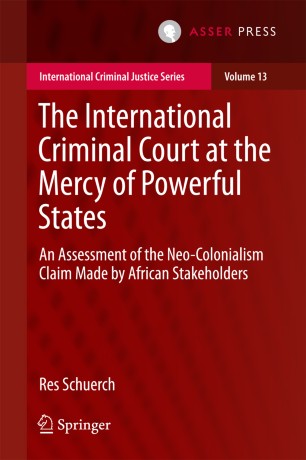 The International Criminal Court at the Mercy of Powerful States

An Assessment of the Neo-Colonialism Claim Made by African Stakeholders

This book aims to investigate whether, and if so, how, an institution designed to bring to justice perpetrators of the most heinous crimes can be regarded a tool of oppression in a (neo-)colonial sense. To do so, it re-invents the concept of neo-colonialism, which is traditionally associated more with economic or political implications, from an international criminal law perspective, combining historical, political and legal analyses.
Allegations of neo-colonialism in relation to the International Criminal Court (ICC) became widespread after the Court had issued an arrest warrant against the Sudanese President Omar Al-Bashir in 2009. While the Court, since its entry into function in 2002, has been confronted with criticism from various corners, the neo-colonialism controversy was sparked by African stakeholders. Unlike other contributions in this domain, thus, this book provides a Western perspective on an issue more often addressed from an African standpoint, with the intention of distinguishing itself from the more political and emotive and sometimes superficial arguments that exist within critical legal approaches towards the ICC.
The subject matter will primarily be of interest to scholars of international criminal law or those operating at the intersection of law and politics/history, nationals of African states and from other parts of the world professionally interested and/or involved in international criminal law and justice and the ICC, and governmental and non-governmental organizations. Secondly, the book will also appeal and speak to critical legal scholars and those interested in historical legal analysis.
Res Schuerch is a Swiss lawyer specialized in the field of International Criminal Law and the ICC. He previously worked as a researcher at the University of Amsterdam and as an academic assistant at the University of Zürich.
>&</div>