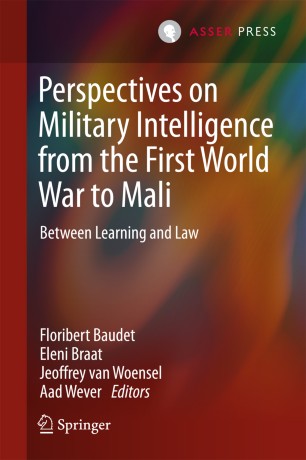 Perspectives on Military Intelligence from the First World War to Mali

Between Learning and Law

Many intelligence practitioners feel that the statutory footing on which intelligence
agencies have been placed forms an impediment to confronting unprecedented contemporary
challenges. On the basis of case studies spanning the period from the First World
War to the present, this book argues that while the intelligence community in the era of
globalization has indeed come to face new and complex challenges that require adaptation,
operating in demanding and changing environments is not new at all. This book questions
the conventional wisdom of 9/11 or the end of the Cold War as caes
urae. It also argues that
the ability to adapt, innovate, question and learn from past experience is crucial for the
success of intelligence organizations, rather than ever-expanding funding.
Agencies’ ability to reflect, adapt and learn from experience determines their subsequent
capability to deliver. One key development resulting from globalization is the marked
increase in cooperation between intelligence agencies of different countries on the one
hand, and between investigative agencies and intelligence agencies on the other. This has
led to concerns over human rights and privacy and to increased calls for accountability and
improved oversight as the increase in cooperation between organizations operating globally
also provides scope for the circumvention of domestic restrictions.
This book proposes an instrument to assess the effectiveness of existing accountability
arrangements and offers new insights into the role of (military) intelligence in a
number of crises, e.g., the 1962 Cold War confrontation over Western New Guinea, and the
functioning of intelligence in peacekeeping oper
ations ranging from Srebrenica to Mali.
Thematically comprehensive, it offers a mixture of historical, legal, operational, and policy
aspects, analyzed through the lens of institutional learning, bringing together academic and
practitioners’ perspectives. The focus lies not only on the familiar Anglo-Saxon experience
but also on cases from India, the Netherlands, South East Asia, Bosnia, Lebanon, and Mali.
The book is aimed at both scholars and practitioners studying and/or working in the field
of civil and milit
ary intelligence, and those involved in international relations and international
humanitarian law/human rights law. It brings together contributions from authors
who spoke at the Conference to commemorate the 100th anniversary of the Dutch Military
Intelligence and Security Service, organized by the Netherlands Intelligence Studies Association
(NISA), and from a number of authors who were specifically invited to participate.