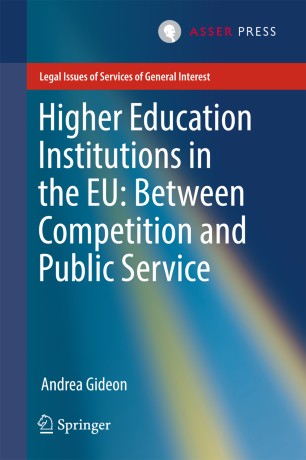 Higher Education Institutions in the EU: Between Competition and Public Service

This book investigates the impact of EU law and policy on the Member States’ higher education institution (HEI) sectors with a particular emphasis on the exposure of research in universities to EU competition law. It illustrates how the gradual application of EU economic law to HEIs which were predominantly identified as being within the public sector creates tensions between the economic and the social spheres in the EU. Given the reluctance of the Member States to openly develop an EU level HEI policy, these tensions appear as unintended consequences of the traditional application of the EU Treaty provisions in areas such as Union Citizenship, the free movement provisions and competition policy to the HEI sector. These developments may endanger the traditional non-economic mission of European HEIs. In this respect, the effects of Union Citizenship and free movement law on HEIs have received some attention but the impact of EU competition law constitutes a largely unexplored area of research and this book redresses that imbalance.

The aim of the research is to show that intended and unintended consequences of the EU economic constitution(s) are enhanced by a parallel tendency of Member States to commercialise formerly public sectors such as the HEI sector. The book investigates the potential tensions through doctrinal analysis and a qualitative study focussing on the exposure of HEI research to EU competition law as an under-researched example of exposure to economic constraints. It concludes that such exposure may compromise the wider aims that research intensive universities pursue in the public interest.

Andrea Gideon is a Postdoctoral Research Fellow at the Centre for Law & Business (National University of Singapore) for which she has suspended her position as Lecturer in Law at the University of Liverpool. In her current project she is investigating the application of competition law to public services in ASEAN. Her previous research concerned tensions between the economic and the social in the EU with a focus on EU competition law in which research area she earned her PhD at the University of Leeds in 2014.