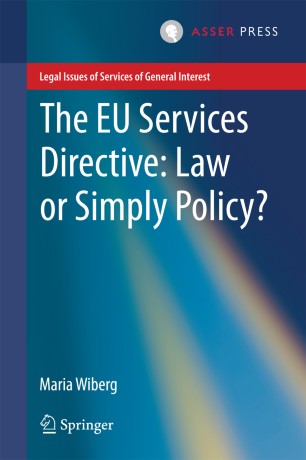 The objective of the EU Services Directive is to realise the internal market for services which is of great importance to the EU and its Member States in respect of facilitating jobs and economic growth. This goal is difficult to achieve without also issues of national social policy, closely related to the welfare state, being affected. This has led to the EU Services Directive exhibiting distinctive features and functions, introducing unique implementation and evaluation procedures and mechanisms to be used by, and within, the Member States. Thus, the Services Directive’s characteristics have raised numerous legal questions essential for its full understanding and implementation. It has become a “moving target” for the national administrations. The understanding and implementation of the Services Directive raises several central questions, such as: is it to be interpreted as law or simply policy, and, in light of this, what are its actual effects on the regulatory autonomy of the Member States? In general, does the Services Directive represent a new and innovative instrument which facilitates prosperous integration within the EU or, has the EU legislator gone beyond its regulatory competence?

Maria Wiberg is a Doctor of European Law and Deputy Director at the Swedish Ministry of Foreign Affairs, the Department for the EU Internal Market and the Promotion of Sweden and Swedish Trade, Stockholm, Sweden.