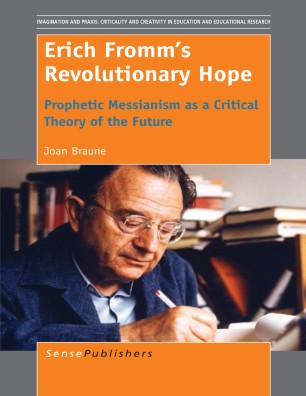 Prophetic Messianism as a Critical Theory of the Future

Part of the Imagination and Praxis book series (IPCC)

“Socialism … is essentially prophetic Messianism …” So Erich Fromm writes in his 1961 classic Marx’s Concept of Man. World-renowned Critical Theorist, activist, psychoanalyst, and public Marxist intellectual, Erich Fromm (1900-1980) played a pivotal role in the early Frankfurt Institute for Social Research and influenced emancipatory projects in multiple disciplines. While he remains popularly well known as author of such best-selling books as Escape from Freedom and The Art of Loving, Fromm’s contribution to Critical Theory is now being rediscovered. Fromm’s work on messianism in the 1950s-1970s responded to earlier debates among early twentieth century German Jewish thinkers and radicals, including Hermann Cohen, Rosa Luxemburg, Martin Buber, Gershom Scholem, and Georg Lukács. The return to Fromm, as well as growing interest in Jewish messianism’s influence on the Frankfurt School, makes this book timely. Fromm’s bold defense of radical hope and trenchant critique of political catastrophism are more relevant than ever. “Joan Braune’s work on Erich Fromm is indispensable for students of Frankfurt School critical theory … Braune reveals the central role that Fromm played in the early development of Frankfurt School critical theory. She also discloses the role that Fromm played in shaping some of the most important debates in critical theory. One of the most interesting issues that informed the debates among early critical theorists was messianism and its political implications. There is no better book on this issue. Those of us who are interested in the development of Frankfurt School critical theory owe Dr. Braune a great deal of gratitude.” – Arnold L. Farr, Associate Professor of Philosophy, University of Kentucky, President, International Herbert Marcuse Society “Joan Braune's work on Fromm brings this important figure in critical theory back into the conversation at a needed time. It also appears at a time when we must recapture prophetic messianism – the hope in humanity for a better future.” Jeffery Nicholas, Providence College, author of Reason, Tradition, and the Good: MacIntyre’s Tradition-Constituted Reason and Frankfurt School Critical Theory