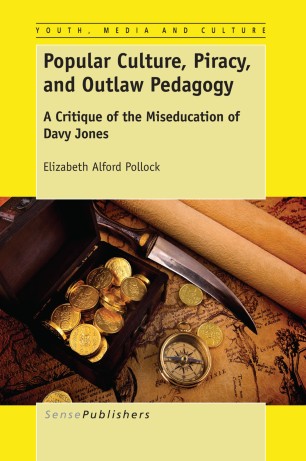 A Critique of the Miseducation of Davy Jones

Popular Culture, Piracy, and Outlaw Pedagogy explores the relationship between power and resistance by critiquing the popular cultural image of the pirate represented in Pirates of the Caribbean. Of particular interest is the reliance on modernism’s binary good/evil, Sparrow/Jones, how the films’ distinguish the two concepts/characters via corruption, and what we may learn from this structure which I argue supports neoliberal ideologies of indifference towards the piratical Other. What became evident in my research is how the erasure of corruption via imperial and colonial codifications within seventeenth century systems of culture, class hierarchies, and language succeeded in its re-presentation of the pirate and members of a colonized India as corrupt individuals with empire emerging from the struggle as exempt from that corruption. This erasure is evidenced in Western portrayals of Somali pirates as corrupt Beings without any acknowledgement of transnational corporations’ role in provoking pirate resurgence in that region. This forces one to re-examine who the pirate is in this situation. Erasure is also evidenced in current interpretations of both Bush’s No Child Left Behind and Obama’s Race to the Top initiative. While NCLB created conditions through which corruption occurred, I demonstrate how Race to the Top erases that corruption from the institution of education by placing it solely into the hands of teachers, thus providing the institution a “free pass” to engage in any behavior it deems fit. What pirates teach us, then, are potential ways to thwart the erasure process by engaging a pedagogy of passion, purpose, radical love and loyalty to the people involved in the educational process.