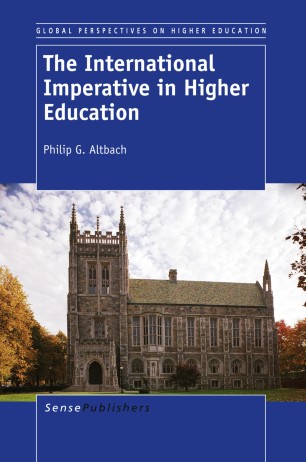 The International Imperative in Higher Education

21st century higher education faces immense changes—from the broad impact of globalization to the implications of massification and the growth of enrollments worldwide. The International Imperative in Higher Education focuses on most of the central elements affecting universities worldwide. Included among the themes analyzed are global issues such as corruption, the continuing impact of the brain drain and the phenomenon of brain exchange, the role of English in internationalization, changes in the environment for publishing and knowledge distribution, and academic freedom. The specific elements of internationalization, such as growing commercialization, and the role of agents and recruiters as a part of global student flows are considered. The role of the academic profession in a rapidly changing university environment is also discussed. Special attention is paid to China and India, the world’s two largest academic systems, and the specific challenges faced by them. This book consists of 40 concise essays analyzing key aspects of global higher education. They bring together broad analysis and an underlying concern for the public good aspects of higher education in a comparative and international framework.