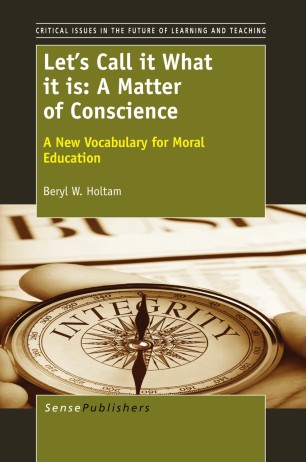 Let’s Call it What it is

A Matter of Conscience

Part of the Critical Issues in the Future of Learning and Teaching book series (CIFL, volume 6)

With a new century, there has emerged a new age in moral considerations. The Arab Spring, Facebook, and the Occupy Movement all point to an awareness of, and concern for, the moral character of the individual and the collective. The phrase, “it’s the right thing to do”, echoing throughout news media and one’s daily exchanges, typically indicates a moral positioning. Presented in this book is the argument that now is the time to call it what it is, a matter of conscience, and to embrace the transformative power of a new vocabulary for moral and character education. In a more expansive approach than typically seen, this book examines the nature and function of conscience. Building upon the foundational work of Thomas Green (1999), the vocabulary of reflexive judgment, reflexive emotions, normation, and voices of conscience, are explored as they apply to moral formation, with examples and applications provided. Specific attention is given to the interrelationship of the collective conscience with democracy. Educating for conscience and the notion of the sacred are also examined. Written from an educator’s perspective, this book offers a framework for moral education to both the secular and religious domains.