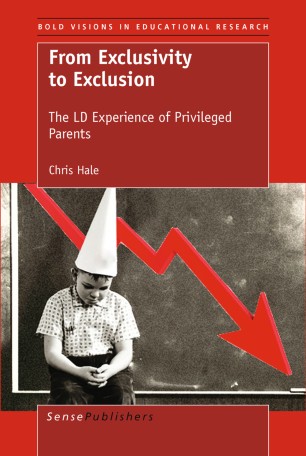 From Exclusivity to Exclusion

The LD Experience of Privileged Parents

What is lived experience at the intersection of privilege and disability? More specifically, what are the experiences of privileged parents of a child with disability? How does their child’s disability impact their efforts to reproduce their advantage? These and other questions inspired the research on which this book is based. The plight of poor and marginalized parents of children with disabilities has received considerable scholarly attention yet the experiences of their counterparts at the opposite end of the socioeconomic spectrum have garnered scant notice. For parents at the bottom rung of society, their child’s disability becomes yet another compounding marker of oppression. For parents of means and influence, disability represents an ontological contradiction. While they are oppressors, in that they reap the benefits of inequitable and oppressive social structures, they are also oppressed by ableism and other systems of societal bias. The product of an ethnographic case study, this book trains a phenomenological lens on the lived experience of this contradiction. The participants in this research are privileged urban parents of a 14-year-old boy with dyslexia. Their account of the struggles they faced over the three years their son spent in a mainstream private school is the focus of analysis and discussion. Despite their efforts, including lavish expenditures of economic and cultural capital, the school community’s responses to the child’s disability and subsequent academic failure resulted in iterated enactments of symbolic and physical segregation and eventual banishment. Their son’s dyslexia threatened the collective investment in normality, his academic failure threatened the underlying assumptions of schooling, and his parents’ advocacy challenged the symbolic authority of school professionals.