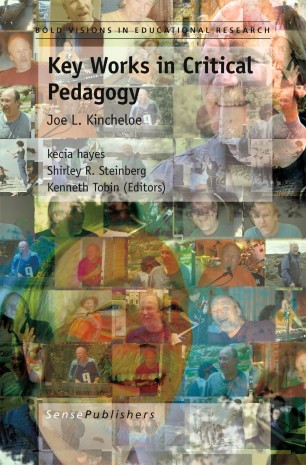 Key Works in Critical Pedagogy: Joe L. Kincheloe comprises sixteen papers written within a twenty-year period in which Kincheloe inspired legions of educators with his incisive analyses of education. Kincheloe was a prolific thinker and writer who produced an enormous number of books and chapters and journal articles.In a career cut short by his untimely death, Kincheloe led the way with an approach to research and pedagogy that incorporated multiperspectival approaches that examined a wide range of topics including schooling, cultural studies, research bricolage, kinderculture, Christotainment, and capitalism. In these works Kincheloe used accessible, elegantly produced language to capture his emotional yet scholarly ways of engaging with the world. He was a champion of the disenfranchised and his writing consistently examined social life from the perspective of participants who were often treated harshly because of their marginalization. The articles in this book were selected to encompass Kincheloe’s impressive scholarly career and to draw attention to the necessity for educators to take a critical stance with respect to the enactment of education to reproduce disadvantage. Among the theoretical frameworks included in the works are critical pedagogy, research, hermeneutics, phenomenology, cultural studies, and post-formal thought. Key Works in Critical Pedagogy is a comprehensive introduction to the scholarly contributions of one of the foremost educational researchers of our time. The selected chapters and associated scholarly review essays constitute a reference resource for researchers, educators, students of education – and all of those with an interest in adopting a deeper view of ways in which policies and practices shape education and social life to produce privilege and disadvantage simultaneously in ways that are often hidden from view. The critical perspective that permeates these works constitute ways of thinking and being in the world that others can adopt as a framework for analyzing their engagement in education as researchers, teacher educators, policymakers, students, parents of students, and members of the community at large. Responding to each of Kincheloe's chapters is a scholar/teacher who is intimately familiar with the works, theories, and epistemologies of this unique scholar.