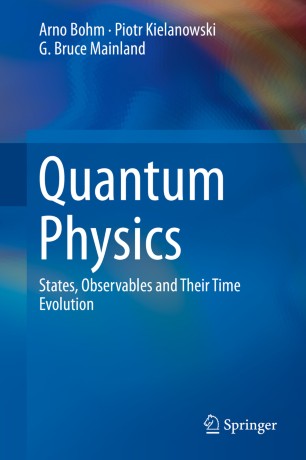 States, Observables and Their Time Evolution

This is an introductory graduate course on quantum mechanics, which is presented in its general form by stressing the operator approach.
Representations of the algebra of the harmonic oscillator and of the algebra of angular momentum are determined in chapters 1 and 2 respectively. The algebra of angular momentum is enlarged by adding the position operator so that the algebra can be used to describe rigid and non-rigid rotating molecules. The combination of quantum physical systems using direct-product spaces is discussed in chapter 3. The theory is used to describe a vibrating rotator, and the theoretical predictions are then compared with data for a vibrating and rotating diatomic molecule. The formalism of first- and second-order non-degenerate perturbation theory and first-order degenerate perturbation theory are derived in chapter 4. Time development is described in chapter 5 using either the Schroedinger equation of motion or the Heisenberg’s one.
An elementary mathematical tutorial forms a useful appendix for the readers who don’t have prior knowledge of the general mathematical structure of quantum mechanics.