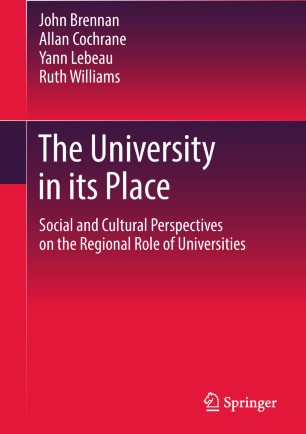 The University in its Place

Social and Cultural Perspectives on the Regional Role of Universities

This book sets out to understand the significance of geographical context – place – for universities in the globalised setting of the twenty-first century. It examines their social impact on the regions in which they are situated, both from the perspectives of the universities themselves and from the perspectives of a range of different local and regional interest groups. It draws on a national study in the UK which has examined the role played by universities in four contrasting regional contexts. This UK study will be set within the larger theoretical and international literature on the role played by universities in processes of social change and transformation. An important theme of the book is the effects of university activities on various socially disadvantaged groups and consideration is given to whether there are ‘winners’ and ‘losers’ arising from the activities and interventions of universities. The book distinguishes between ‘discourses’, ‘activities’ and their ‘impacts’ in considering the role of universities and emphasises the importance of history and context as important mediators of national and institutional policies. It examines some of the key partnerships which universities enter into within their regions and considers some of the factors which determine the nature of these partnerships. Implications are drawn out for university leaderships and for regional and national policy bodies.

The book provides empirical evidence in a field marked by a considerable amount of rhetoric from interested parties. One of the book’s conclusions is that there is considerable diversity among higher education institutions in how they perform a regional role, but it is a significant question for each of them. Institutional variation and regional setting come together to shape what is achievable.