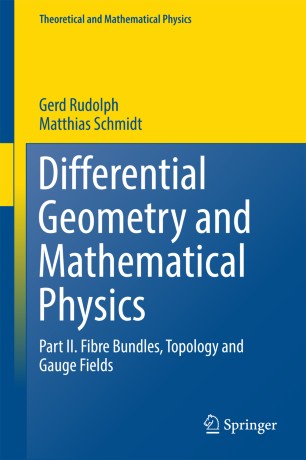 The book is devoted to the study of the geometrical and topological structure of gauge theories. It consists of the following three building blocks:
- Geometry and topology of fibre bundles,
- Clifford algebras, spin structures and Dirac operators,
- Gauge theory.
Written in the style of a mathematical textbook, it combines a comprehensive presentation of the mathematical foundations with a discussion of a variety of advanced topics in gauge theory.
The first building block includes a number of specific topics, like invariant connections, universal connections, H-structures and the Postnikov approximation of classifying spaces.
Given the great importance of Dirac operators in gauge theory, a complete proof of the Atiyah-Singer Index Theorem is presented. The gauge theory part contains the study of Yang-Mills equations (including the theory of instantons and the classical stability analysis), the discussion of various models with matter fields (including magnetic monopoles, the Seiberg-Witten model and dimensional reduction) and the investigation of the structure of the gauge orbit space. The final chapter is devoted to elements of quantum gauge theory including the discussion of the Gribov problem, anomalies and the implementation of the non-generic gauge orbit strata in the framework of Hamiltonian lattice gauge theory.
The book is addressed both to physicists and mathematicians. It is intended to be accessible to students starting from a graduate level.