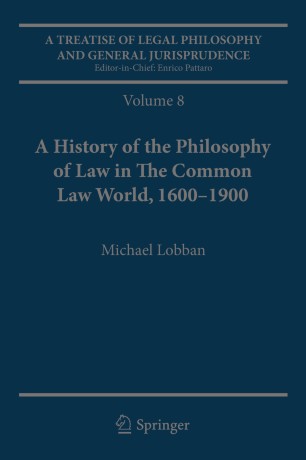 A Treatise of Legal Philosophy and General Jurisprudence

A Treatise of Legal Philosophy and General Jurisprudence is the first-ever multivolume treatment of the issues in legal philosophy and general jurisprudence, from both a theoretical and a historical perspective. The work is aimed at jurists as well as legal and practical philosophers. Edited by the renowned theorist Enrico Pattaro and his team, this book is a classical reference work that would be of great interest to legal and practical philosophers as well as to jurists and legal scholar at all levels. The work is divided The theoretical part (published in 2005), consisting of five volumes, covers the main topics of the contemporary debate; the historical part, consisting of six volumes (Volumes 6-8 published in 2007; Volumes 9 and 10, published in 2009; Volume 11 published in 2011 and volume 12 forthcoming in 2015), accounts for the development of legal thought from ancient Greek times through the twentieth century. The entire set will be completed with an index.

​Volume 7: The Jurists’ Philosophy of Law from Rome to the Seventeenth Century
edited by Andrea Padovani and Peter Stein

Volume 7 is the second of the historical volumes and acts as a complement to the previous Volume 6, discussing from the jurists’ perspective what that previous volume discusses from the philosophers’ perspective. The subjects of analysis are, first, the Roman jurists’ conception of law, second, the metaphysical and logical presuppositions of late medieval legal science, and, lastly, the connection between legal and political thought up to the 17th century. The discussion shows how legal science proceeds at every step of the way, from Rome to early modern times, as an enterprise that cannot be untangled from other forms of thought, thus giving rise to an interest in logic, medieval theology, philosophy, and politics—all areas where legal science has had an influence.

Volume 8: A History of the Philosophy of Law in The Common Law World, 1600–1900
by Michael Lobban

Volume 8, the third of the historical volumes, offers a history of legal philosophy in common-law countries from the 17th to the 19th century. Its main focus (like that of Volume 9) is on the ways in which jurists and legal philosophers thought about law and legal reasoning. The volume begins with a discussion of the ‘common law mind’ as it evolved in late medieval and early modern England. It goes on to examine the different jurisprudential traditions which developed in England and the United States, showing that while Coke’s vision of the common law continued to exert a strong influence on American jurists, in England a more positivist approach took root, which found its fullest articulation in the work of Bentham and Austin.