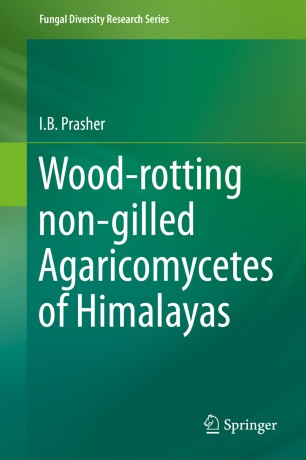 Wood rotting non-gilled agaricomycetes of Himalayas is the outcome of the extensive explorations carried out by the author and his students in the Himalayas for more than a decade. It incorporates original research findings along with that based on literature survey. Besides the study of own collections, the collections deposited in the Herbarium of Botany Department, Panjab University, Chandigarh (PAN) and in other national herbarias have also been critically examined. The basic aim of the compilation has been to provide a workable manual for easy and accurate identification of this important group of fungi for the research students as well as for those interested in exploration of these fungi in the Himalayas which lies in the jurisdiction of India. Since whole of the Indian Himalayas; which include north-western as well as eastern Himalayas; has been covered, the manual will also be useful in identification of these fungi of adjoining countries. Keeping this in mind, the descriptions of all the species have been supplemented with camera lucida drawings whereas colored photographs of the fructifications of the 228 species have been provided for easy identification. The book includes comprehensive survey of the literature pertaining to this important group of fungi which has a direct bearing on wood industry and forest ecosystem besides commercial application in bioremediation and pollution control. Detailed methodology of modes of collection, preservation and identification including macro and micromorphology has been included in a separate chapter. An account of the vegetational pattern in different altitudinal zones of the Himalayas has been given in detail. The monograph also dwells on mycogeographic distribution of these fungi. This volume will be particularly useful for easy identification of these fungi for post-graduate and research students of Indian-universities when they undertake floristic explorations of the Himalayas and elsewhere