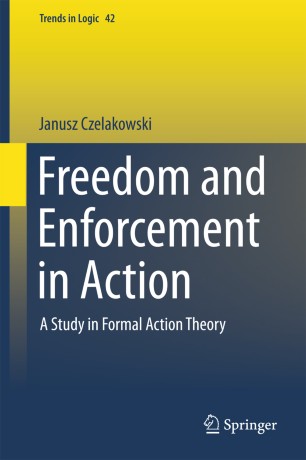 Freedom and Enforcement in Action

A Study in Formal Action Theory

Part of the Trends in Logic book series (TREN, volume 42)

Action theory is the object of growing attention in a variety of scientific disciplines, and this is the first volume to offer a synthetic view of the range of approaches possible in the topic. The volume focuses on the nexus of formal action theory with a startlingly diverse set of subjects, which range from logic, linguistics, artificial intelligence, and automata theory to jurisprudence, deontology, and economics. It covers semantic, mathematical and logical aspects of action, showing how the problem of action breaks the boundaries of traditional branches of logic located in syntactics and semantics and now lies on lies on the borderline between logical pragmatics and praxeology.

The chapters here focus on specialized tasks in formal action theory, beginning with a thorough description and formalization of the language of action, and moving through material on the differing models of action theory to focus on probabilistic models, the relations of formal action theory to deontic logic, and its key applications in algorithmic and programming theory. The coverage thus fills a notable lacuna in the literary corpus, and offers solid formal underpinning in cognitive science by approaching the problem of cognition as a composite action of mind.​