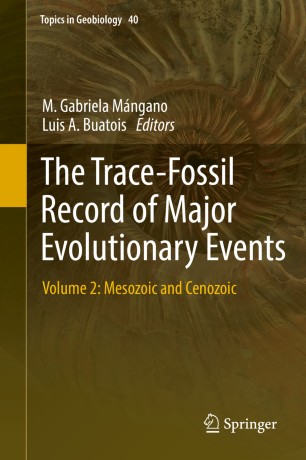 Part of the Topics in Geobiology book series (TGBI, volume 40)

This volume addresses major evolutionary changes that took place during the Mesozoic and the Cenozoic. These include discussions on major evolutionary radiations and ecological innovations on land and at sea, such as the Mesozoic marine revolution, the  Mesozoic radiation of vertebrates, the Mesozoic lacustrine revolution, the Cenozoic radiation of mammals, the evolution of paleosol biotas, and the evolution of hominins. The roles of mass extinctions at the end of the Triassic and at the end of the Cretaceous are assessed.

This volume set provides innovative reviews of the major evolutionary events in the history of life from an ichnologic perspective. Because the long temporal range of trace fossils has been commonly emphasized, biogenic structures have been traditionally overlooked in macroevolution. However, comparisons of ichnofaunas through geologic time do reveal the changing ecology of organism-substrate interactions. The use of trace fossils in evolutionary paleoecology represents a new trend that is opening a window for our understanding of major evolutionary radiations and mass extinctions. Trace fossils provide crucial evidence for the recognition of spatial and temporal patterns and processes associated with paleoecologic breakthroughs.

Gabriela Mángano got her PhD at the University of Buenos Aires. Since 2004, she is with the University of Saskatchewan (Canada), where she is a Professor. Gabriela’s research interests are in the field of animal substrate interactions (Ichnology) and their significance in evolutionary paleoecology. During the last years, she has been particularly interested on the trace fossils associated with Burgess Shale-type deposits, having done research in Burgess Shale and Sirius Passet, among other sites. She is the author of three books, has edited three special publications and is the author of approximately 170 scientific papers. She is at the Editorial Board of a number of journals, such as Journal of Paleontology, Palaios, Paleontologia Electronica and Ameghiniana.

Luis Buatois obtained his PhD at the University of Buenos Aires and is a Professor at the University of Saskatchewan (Canada) since 2004, specializing in paleoenvironmental, stratigraphic, and evolutionary aspects of ichnology. He has been Vice-President of the International Palaeontological Association and President of the International Ichnological Association. Luis has published five books, edited three journal special issues, and is the author of over 200 scientific papers. He is also a member of the editorial board of a number of journals, including Lethaia, Sedimentary Geology, Marine and Petroleum Geology, Ichnos, Ameghiniana, Latin American Journal of Sedimentology and Basin Analysis and Spanish Journal of Paleontology.

“The two volumes of The Trace-Fossil Record of Major Evolutionary Events cover trace fossils and the nature of the behavior of past organisms to an amazing degree and go well beyond singular evolutionary events. … The books are a great resource for both seasoned academics and those who are just starting to learn about the whole range of fossil types … .” (Michael Meyer, The Quarterly Review of Biology, Vol. 93 (1), March, 2018)
“The book is proof that ichnology with its solid theoretical framework and sufficient methodological tools can deliver clues and also answer evolutionary questions, or may provide decisive puzzle-pieces in the reconstruction of Earth's history of life. The extensive references to mainly recent literature for each chapter are clearly one of the strong points of the book. … The two-volume book is considered essential for each geoscientific library … .” (Lothar H. Vallon, Zentralblatt für Geologie und Paläontologie, Iss. 2, 2017)
Buy options