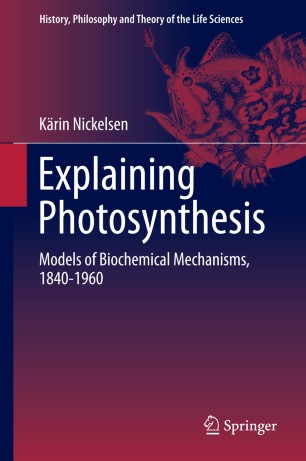 Part of the History, Philosophy and Theory of the Life Sciences book series (HPTL, volume 8)

Recounting the compelling story of a scientific discovery that took more than a century to complete, this trail-blazing monograph focuses on methodological issues and is the first to delve into this subject. This book charts how the biochemical and biophysical mechanisms of photosynthesis were teased out by succeeding generations of scientists, and the author highlights the reconstruction of the heuristics of modelling the mechanism—analyzed at both individual and collective levels.

Photosynthesis makes for an instructive example. The first tentative ideas were developed by organic chemists around 1840, while by 1960 an elaborate proposal at a molecular level, for both light and dark reactions, was established. The latter is still assumed to be basically correct today. The author makes a persuasive case for a historically informed philosophy of science, especially regarding methodology, and advocates a history of science whose narrative deploys philosophical approaches and categories. She shows how scientists’ attempts to formulate, justify, modify, confirm or criticize their models are best interpreted as series of coordinated research actions, dependent on a network of super- and subordinated epistemic goals, and guided by recurrent heuristic strategies.

With dedicated chapters on key figures such as Otto Warburg, who borrowed epistemic fundamentals from other disciplines to facilitate his own work on photosynthesis, and on more general topics relating to the development of the field after Warburg, this new work is both a philosophical reflection on the nature of scientific enquiry and a detailed history of the processes behind one of science’s most important discoveries.

Kärin Nickelsen is professor of history of science at the Ludwig-Maximilians-University Munich, Germany. Her research interests focus on the field of history and philosophy of the life sciences, with a particular emphasis on methodological issues. She has published on topics ranging from the practices of natural history in the 18th century to the analysis of experimental physiology and biochemistry of the 19th / 20th centuries.

“Explaining Photosynthesis is an exceptionally clear book, with prose that is supplemented with very helpful diagrams. … examination of the progressive elucidation of the mechanisms of photosynthesis focuses on particular research communities without neglecting to at the same time consider the importance of individual contributions.” (Stéphane Tirard, History and Philosophy of the Life Sciences, Vol. 41, June, 2019)

“Kärin … gives a much needed historical and philosophical account of one of the major research projects in modern plant sciences. … Nickelsen boldly attempts to find some bridge between the history of science and the philosophy of science by identifying heuristic strategies based on her historical representation of photosynthesis research. … she provides not only a history of photosynthesis research, but also a critical history that seeks to extract more generalizable philosophical and sociological lessons from the subject.” (Andre M. Hahn, Philosophy & Theory in Biology, Vol. 18, 2016)