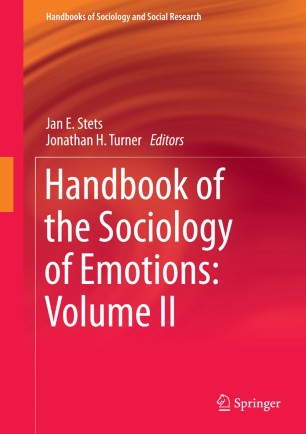 Handbook of the Sociology of Emotions: Volume II

Handbook of the Sociology of Emotions Volume II presents all new chapters in the ever developing area of the sociology of emotions. The volume is divided into two sections: Theoretical Perspectives and Social Arenas of Emotions. It reviews major sociological theories on emotions, which include evolutionary theory, identity theory, affect control theory, social exchange theory, ritual theory, and cultural theory among others. Social arenas where emotions are examined include, but are not limited to, the economy and the workplace, the family, mental health, crime, sports, technology, social movements, and the field of science. All the chapters review the major theories and research in the area, and each chapter ends with some discussion of directions for future research.

With contributions from leading scholars from different areas in the discipline, such as neurosociology, culture, economics, mental health, gender, social movements, discussing state-of-art theory and research on emotions in sociology this volume will generate wider appeal to the sociological community.​