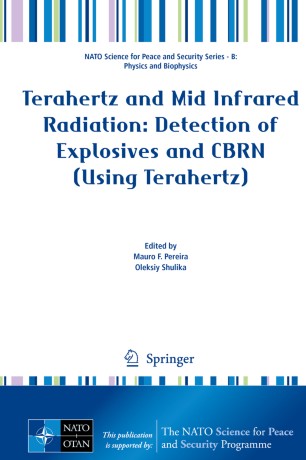 The reader will find here a timely update on new THz sources and detection schemes as well as concrete applications to the detection of Explosives and CBRN. Included is a method to identify hidden RDX-based explosives (pure and plastic ones) in the frequency domain study by Fourier Transformation, which has been complemented by the demonstration of improvement of the quality of the images captured commercially available THz passive cameras. The presented examples show large potential for the detection of small hidden objects at long distances (6-10 m).  Complementing the results in the short-wavelength range, laser spectroscopy with a mid-infrared, room temperature, continuous wave, DFB laser diode and high performance DFB QCL have been demonstrated to offer excellent enabling sensor technologies for environmental monitoring, medical diagnostics, industrial and security applications.  From the new source point of view a number of systems have been presented - From superconductors to semiconductors, e.g. Detection of Terahertz Waves from Superconducting Bi2Sr2CaCu2O8+δ Intrinsic Josephson Junctions.  The quest for a compact room temperature THz source and the recent advances in high power mid-IR QCLs lead to the development of a semiconductor THz source based on intracavity difference frequency generation. Furthermore, alternative electrically pumped THz sources based on the high emission efficiency predicted for polaritonic states in the ultra-strong coupling regime led to the demonstration of electroluminescent devices.  Finally, antipolaritons in dispersive media were discussed and different aspects of the interaction of THz radiation with biomater were presented.