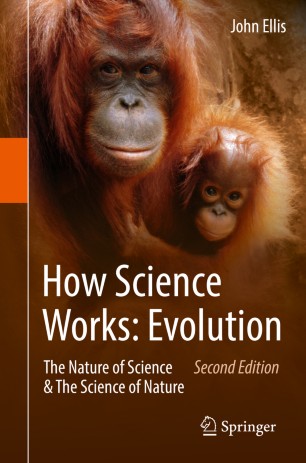 The Nature of Science & The Science of Nature

Evolution is just a theory, isn’t it? What is a scientific theory anyway? Don’t scientists prove things? What is the difference between a fact, a hypothesis and a theory in science? How does scientific thinking differ from religious thinking? Why are most leading scientists atheists? Are science and religion compatible? Why are there so many different religious beliefs but only one science? What is the evidence for evolution? Why does evolution occur? If you are interested in any of these questions and have some knowledge of biology, this book is for you.

“There are many books that explain evolution and how science works, but few can claim the erudition and clarity of this one. Professor Ellis shows elegantly how the philosophical advances of the Enlightenment paved the way for the modern construction of science, and how evolutionary theory follows its best practices. It is a pity that most undergraduates never get a real course in scientific thinking, but you can rectify that by giving them a copy of this book”.

“In this highly readable book John Ellis masterfully describes Darwin`s theory of evolution and the evidence for it. He shows how even the most intricate of biological systems could have arisen by random mutation and survival of the fittest. But for me the most precious aspect of the book is its uncompromising distinction between the natural (scientific) explanation of the universe and all the mutually contradictory supernatural (religious) explanations. Especially in these days when religion is constantly in the news, this book should be a must-read for students, commentators and the thinking public”.

“John Ellis has extensively revised his excellent book `How Science Works`, which uses evolution as an example of the scientific method. As well as describing the basic principles of evolution by natural selection, he makes use of the latest findings in palaeontology, molecular biology and organismal biology to show how the theory stands up to empirical tests. The book is written in a clear and simple style, which makes it accessible to the general reader, as well as being suitable for an introductory undergraduate course on evolution. Only the most hardened creationist would fail to be convinced by it”.