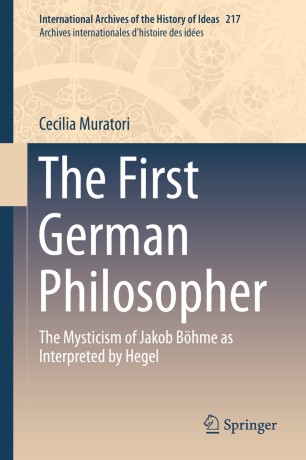 The Mysticism of Jakob Böhme as Interpreted by Hegel

This book investigates Hegel’s interpretation of the mystical philosophy of Jakob Böhme (1575-1624), considered in the context of the reception of Böhme in the 18th and 19th centuries, and of Hegel’s own understanding of mysticism as a philosophical approach. The three sections of this book present: the historical background of Hegel’s encounter with Böhme’s writings; the development of two different conceptions of mysticism in Hegel’s work; and finally Hegel’s approach to Böhme’s philosophy, discussing in detail the references to Böhme both in published writings and manuscripts. According to Hegel, Böhme is “the first German philosopher”. The reason for placing Böhme at the very beginning of German philosophy is that Hegel considers him to be a profound thinker, despite his rudimentary education. Hegel’s fascination with Böhme mainly concerns the mystic’s understanding of the symbiotic relation between God and his opposite, the Devil: he considers this to be the true speculative core of Böhme’s thought. By interpreting Böhme, Hegel intends to free the speculative content of his thought from the limitations of the inadequate, barbarous form in which the mystic expressed it, and also to liberate Böhme from the prejudices surrounding his writings, placing him firmly in the territory of philosophy and detaching him from the obscurity of esotericism. Combining historical reconstructions and philosophical argumentation, this book guides the reader through an important phase in German philosophy, and ultimately into an inquiry about the relationship between mysticism and philosophy itself.