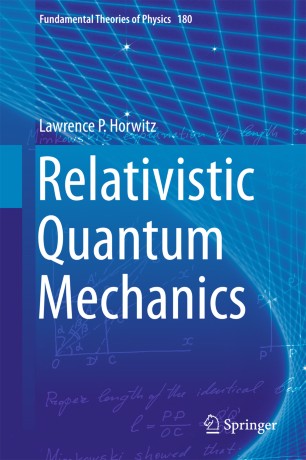 This book describes a relativistic quantum theory developed by the author starting from the E.C.G. Stueckelberg approach proposed in the early 40s. In this framework a universal invariant evolution parameter (corresponding to the time originally postulated by Newton) is introduced to describe dynamical evolution. This theory is able to provide solutions for some of the fundamental problems encountered in early attempts to construct a relativistic quantum theory. A relativistically covariant construction is given for which particle spins and angular momenta can be combined through the usual rotation group Clebsch-Gordan coefficients. Solutions are defined for both the classical and quantum two body bound state and scattering problems. The recently developed quantum Lax-Phillips theory of semigroup evolution of resonant states is described. The experiment of Lindner and coworkers on interference in time is discussed showing how the property of coherence in time provides a simple understanding of the results. The full gauge invariance of the Stueckelberg-Schroedinger equation results in a 5D generalization of the usual gauge theories. A description of this structure and some of its consequences for both Abelian and non-Abelian fields are discussed. A review of the basic foundations of relativistic classical and quantum statistical mechanics is also given. The Bekenstein-Sanders construction for imbedding Milgrom's theory of modified spacetime structure into general relativity as an alternative to dark matter is also studied.