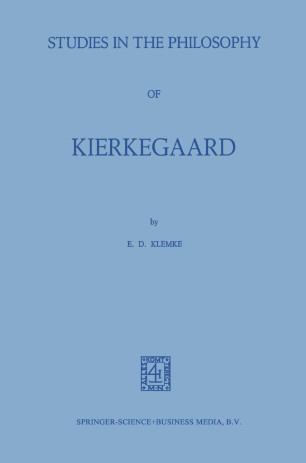 Studies in the Philosophy of Kierkegaard

In this volume, I have given attention to what I consider to be some of the central problems and topics in the philosophical thought of SjiSren Kierkegaard. Some of the chapters have been previously publish­ ed but were revised for their appearance here. Others were written expressly for this book. I have tried to focus on issues which have not been customarily dealt with or emphasized in the scholarship on Kierkegaard with the exception of the writings of David Swenson and Paul L. Holmer to which (and to whom) I am greatly indebted. Some of the positions for which I have argued in this volume (especially in Chapters IV and V) may be controversial. I am grateful to all those who enabled me to carry out or influenced me in my studies of Kierkegaard or who assisted with regard to the research for or preparation of this volume. Among these are: Professors Paul L. Holmer, F. Arthur Jacobson, and Dennis A. Rohatyn; Dean Wallace A. Russell and Vice President Daniel J. Zaffarano of Iowa State University.