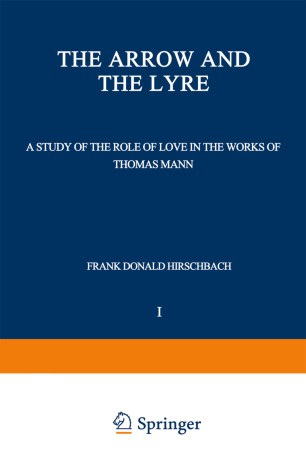 The Arrow and the Lyre

When I first thought about this topic I encountered many ex­ pressions of surprise among my better-read friends, and a number of them asked me: "Is there really much love in Thomas Mann's works, and is it really important?" The posing of this question is the direct result of three decades of criticism which has represented Mann mainly as a serious and sober novelist, and frequently also as a prosy and prolix author who "clutters up" his works with superfluous bits of erudition. HisMagicMountain bids fair to join the list of immortal works of world literature which people bring back from their summer vacations - unread. Mann is, of course, serious and sober and very North German in most of his works, and the charge of occasional verbosity and divagation can well be substantiated. Nevertheless, Mann has, in my opinion, tried to be fundamentally a humorist throughout his life and career, not in the conventional sense of the word in which Fritz Reuter, P. G. Wodehouse or Ring Lardner qualify, but as a man who at an astonishingly early age saw through his fellow humans, analyzed and defined their basic confiicts and decided to be a mediator, a prophet of the realm of the middle. The humor in Mann's works derives from his manner of looking at the human comedy, and our amusement is in direct proportion to our ability to discern a comic element in life, even in tragedy.