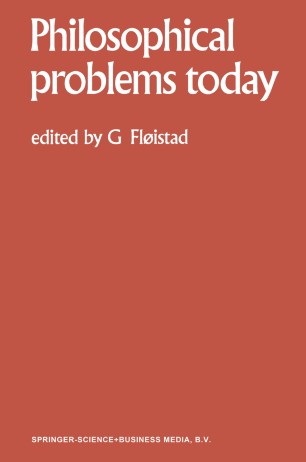 Philosophical Problems Today is a new series of publications from the Institut International de Philosophie. lt follows upon Contemporary Philosophy, a series presenting philosophical research in various world cultures and so far published in seven volumes: Vols. 1-4 on European Philosophy, Vol. 5 on African Philosophy, Vol. 6 on Medieval Philosophy (Part 1 and 2) and Vol. 7 on Asian Philosophy (appeared in 1993). A further volume, dealing with the Philosophy of South America, is still in prepa­ ration (to appear in 1994/95). The new series is based on a different concept. Bach volume consists as a rule of five articles. The articles are extensive discussions of topical philosophical problems and offer always some original contributions. The articles in each volume repre­ sent different philosophical traditions and cultures and may thus contribute to crosscultural communication. Volume 1 in the new series contains articles on standard problems in European and American philosophy. Quine writes on truth and discusses various difficulties connected with the clear definition of the correspondence theory of truth. What are true and false, are propositions. Part of the difficulty stems from the ambiguity of "proposition". Some think that the word refers to certain types of sentences, others that it rather refers to the meaning of such sentences. Another major difficulty is due to the fact that the world, being unique, may be variously grasped.