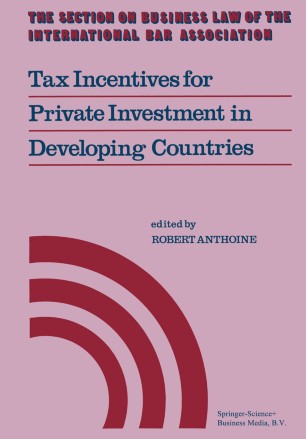 The purpose of this book is to provide within a single volume a comparative analysis of the tax laws of developed countries bearing upon direct private investment in developing countries, and a representative sample of developing country laws bearing upon the receipt of such investment. This study was initiated by the Tax Committee of the Business Section of the International Bar Association under the leadership of Jean-Claude Goldsmith of the Paris Bar. I undertook to act as the reporter, to browbeat colleagues in other countries to write national reports, and to provide the reporter's overview statement. This report includes studies of fourteen developed countries prepared by national reporters and summaries of five other developed country laws. Note­ worthy are the detailed examinations of the laws of the Federal Republic of Germany and of Japan, the two developed countries that have provided the most comprehensive system of incentives for private investment in developing countries. Also contained herein are reports from eight developing countries, including a thorough examination of the laws of Brazil. Attention is paid in the developed country reports not only to those tax provisions that act as in inducement to foreign investment but also to those that favor domestic investment and hence act as a disincentive to foreign investment. Relevant double taxation agreements are discussed, and other aspects such as exchange control and government grants are also mentioned.