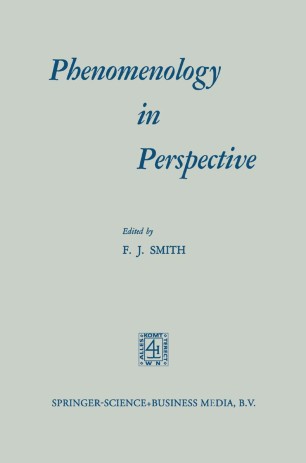 Phenomenology, as one of many ways of philosophizing, can be seen from many perspectives. And, as a body of thought, it can be placed in perspective. The essays in this book clearly show that there is no one way of "doing phenomenology," any more than there is any one way to philosophize. Phenomenology reveals itself as many-faceted, and there is work in this field for many talents. The fact that there are such varied aspects to the study of phenomenology is what puts it in perspective as a rich source of philosophical thought. In the sharing of their various perspectives the authors of these essays discuss the present and future of phenomenology as a philosophical discipline, the important subjects of language, of interpersonal relations, of self­ awakening, of visual and auditory perception and imagination, of ethical education. The names of Husserl, Heidegger, and Merleau­ Ponty 100m large in these essays, but Max Scheler's name is also placed in perspective as one of the major phenomenological thinkers, thus far not as weH known in America as he might be. No one claims that the thought of Martin Heidegger is easy to comprehend, especiaHy if immediate "results" are demanded. The difficult essays on Heidegger reflect some of the innate complexities of his thought.