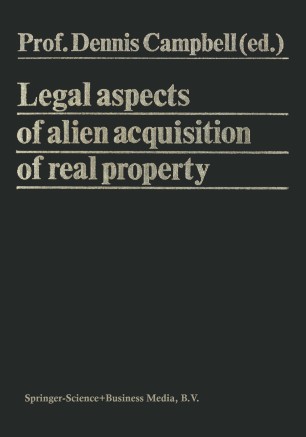 The concept of the nation-state has as an essential element the control of territory, legal and political authority over the acquisition, ownership, use and disposition of land. The rapid increase during the 1970s in the pace of foreign 1 investment -with the acquisition of real property as a centerpiece-has stirred new concern for the ability and disability of aliens to invest in and acquire title 2 to the physical territory of a given state. With a variety of factors now stimulating 3 foreign investment in land, increased attention has been given in many countries to the role of the state in controlling, inhibiting or prohibiting investment in real property by aliens. English law long ago established that the alien would be subject to significant 4 disabilities in connection with the ownership of land. The imposition of similar 5 restrictions on aliens is found in the early law of most nation-states. Such disabilities have their roots in the feudal period, and it was not until the eighteenth century that the countries of Continental Europe abandoned the absolute 6 prohibition on succession to real property by aliens. The prohibition was replaced by a tax imposed on aliens who withdrew the property of the state of which the decedent was a citizen. Common Law rules restricting alien succession developed in the thirteenth century.