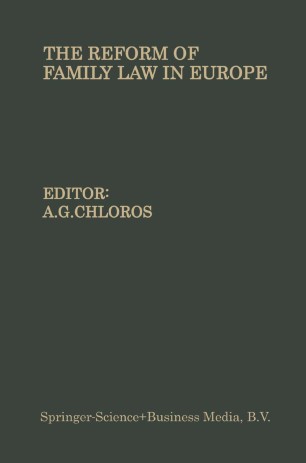 The Equality of the Spouses—Divorce—Illegitimate children

In the last few years European Family Law has undergone considerable changes. Although in the past law reform was slow, since 1969 the impetus for reform has gathered momentum. It is no exaggeration to say that the changes that have occurred in Europe in the last six or seven years have radically altered the very concept of the family in Europe. As a distinguished scholar and former editor of the Family Law volume of the International Encyclopaedia of Com­ parative Law, Professor Max Rheinstein, has put it: 'These transformations are not fully completed anywhere. They have gone farthest in the countries of highest industrialization and in those of socialist rule. But they have set in wherever industrialization has obtained a foothold. The degree of 'modernization' offamily law may indeed be used as an index of a society's degree of Westernization. 'l Yet, such is the force of traditional patterns of thought that, although we are aware of distinct changes in various legal systems, the underlying and implied assumption is that family law can still move within the traditional framework. This is not surprising for, until comparatively recently at least family law was not thought of as a suitable subject of unification. It was claimed that there is a peculiar and distinct element which derives from the mores and innermost beliefs of each people, from a sort of family Volksgeist that renders impossible the approximation or unification of family law.