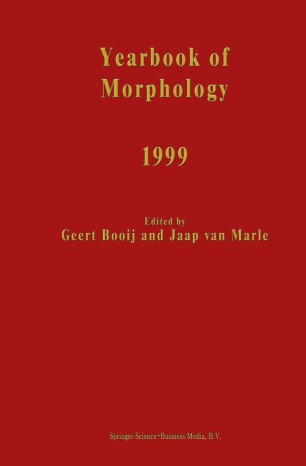 Part of the Yearbook of Morphology book series (YOMO)

A revival of interest in morphology has occurred during recent years. The Yearbook of Morphology series, published since 1988, has proven to be an eminent support for this upswing of morphological research, since it contains articles on topics which are central in the current theoretical debates which are frequently referred to.
The Yearbook of Morphology 1999 focuses on diachronic morphology, and shows, in a number of articles by renowned specialists, how complicated morphological systems develop in the course of time. In addition, this volume deals with a number of hotly debated issues in theoretical morphology: its interaction with phonology (including Optimality Theory), the relation between inflection and word formation, and the formal modeling of inflectional systems. A special feature of this volume is an article on morphology in sign language, a very new and exciting area of research in linguistics.
The relevant evidence comes from a wide variety of languages, amongst which Germanic, Romance, and Slavic languages are prominent.
Audience: Theoretical, descriptive, and historical linguists, morphologists, phonologists, and psycholinguists will find this book of interest.

"All of these articles reflect the "cutting edge" of morphological research, making this volume, like its predecessors in the same series, an important acquisition for any linguist or librarian serious about keeping pace with morphological theory." (Edward J. Vajda, LANGUAGE, June 2005)