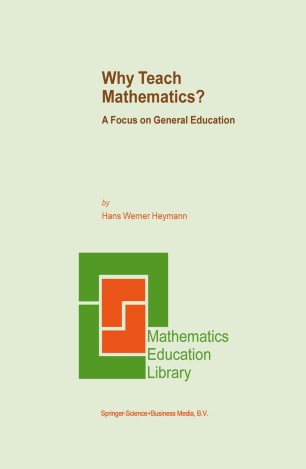 A Focus on General Education

Seven years after its publication in Germany, this book is now available to English readers. In the German-speaking countries, the publication led to intense controversies on the significance, the goals, and the future development of mathematics instruction in schools. Currently, there is much debate in many countries on how to evaluate the findings of such international comparative studies as TIMSS and PISA, debate on which consequences should be taken for designing national curricula and on which reforms of mathematics instruction in schools should be initiated. I hope that this book might provide substantial suggestions beneficial to resolving these and similar issues, for its major concern is twofold: first, to determine the essential characteristics of general education in schools, and, secondly, on the basis of this, to specify the status of mathematics instruction within the framework of general education in schools. Due to the fundamental nature of my argument, I did not consider it necessary to ‘update’ the book superficially for the English edition. Thus, I am presenting the book to the English-speaking public in its original form, the single exception being that I have omitted the original second chapter since that chapter (“Bildung und Allgemeinbildung”) seems to be relevant only to those readers especially interested in German educational debates. Most of those readers, in turn, will belong to the German-speaking public. The omission of this chapter necessitated a few insignificant alterations in the (otherwise unchanged) introduction and at the beginning of the present second (originally, third) chapter.