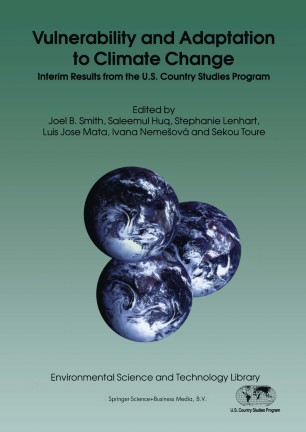 Vulnerability and Adaptation to Climate Change

Martin Parry University College, London, UK The 13 country studies collected in this re­ Adaptations Assessment published by the port represent the first of what is likely to Intergovernmental Panel on Climate Change become a worldwide, country-by-country (Carter et al., 1994) as an agreed technical estimate of the likely impacts of, and appro­ set of scientific methods for climate impact priate adaptations to, greenhouse-gas-in­ assessment and has written its own guidance duced global climate change. document, Guidance for Vulnerability and Adaptation Assessment (U.S. CSP, 1994). Under the U.N. Framework Convention on The u.S. Country Studies Program devel­ Climate Change (UNFCCC), signatories oped the Guidance and other reviews of agreed to two near-term actions and one ma­ methodology into a nonspecialist set of jor subsequent one. The two near-term ac­ workbooks for use at the country level, tions are to make annual estimates of the which, backed up by advice from experi­ emissions and sinks of greenhouse gases, enced scientists from the United States and which are now being reported as part of a other countries, enabled local scientists to country-by-country inventory developed by conduct their own vulnerability and adapta­ the U.N. Environment Programme, the Or­ tion assessments.