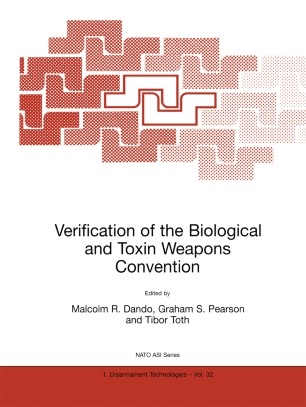 Verification of the Biological and Toxin Weapons Convention

In the summer of 1997 some twelve lecturers and sixty students met for ten days in Budapest Hungary in a NATO Advanced Studies Institute (ASI) to consider "New Scientific and Technical Aspects of Verification of the Biological and Toxin Weapons Convention". In many ways the meeting was ahead of its time. The Ad Hoc Group was only then about to move to the discussion of a rolling text of the Protocol to the Biological and Toxin Weapons Convention (BTWC). It had been mandated to negotiate the Protocol by the Special Conference which had considered the work of the VEREX process that had taken place following the 1991 Third Review Conference of the Convention. Now, in late 1999, after much further negotiation of the text of the Protocol we are moving towards the endgame of the negotiations. Nevertheless, the scientific and technical issues discussed in the ASI in Hungary continue to be of direct relevance to the verification of the Convention and will continue to be relevant as the eventual Protocol moves from agreement through a Preparatory Commission stage and into full implementation over the next several years. The papers in this volume are much as they were presented in Budapest both in order of presentation and in content. They were designed by the ASI co-directors, Professor Graham Pearson and Ambassador Tibor Toth (Chairman of the Ad Hoc Group) to provide an integrated overview and in-depth analysis of the issues at stake.