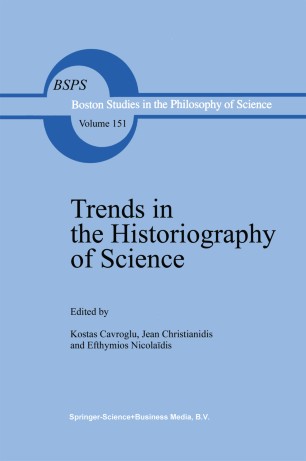 Trends in the Historiography of Science

Part of the Boston Studies in the Philosophy of Science book series (BSPS, volume 151)

The articles in this volume have been first presented during an international Conference organised by the Greek Society for the History of Science and Technology in June 1990 at Corfu. The Society was founded in 1989 and planned to hold a series of meetings to impress upon an audience comprised mainly by Greek students and scholars, the point that history of science is an autonomous discipline with its own plurality of approaches developed over the years as a result of long discussions and disputes within the community of historians of science. The Conference took place at a time when more and more people came to realise that the future of the Greek Universities and Research Centres depends not only on the progress of the institutional reforms, but also very crucially on the establishment of new and modern subject areas. Though there have been significant steps towards such a direction in the physical sciences, mathematics and engineering, the situation in the so-called humanities has been, at best, confusing. Political expediencies of the post war years and ideological commitments to a glorious, yet very distant past, paralysed the development of the humanities and constrained them within a framework which could not allow much more than a philological approach.