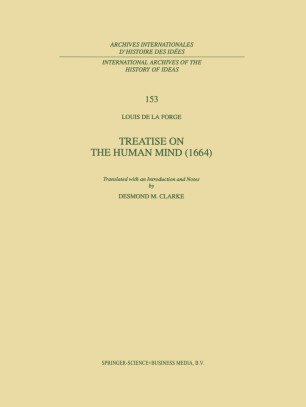 Descartes' philosophy represented one of the most explicit statements of mind-body dualism in the history of philosophy. Its most familiar expression is found in the Meditations (1641) and in Part I of The Principles 0/ Philosophy (1644). However neither of these books provided a detailed discussion of dualism. The Meditations was primarily concerned with finding a foundation for reliable human knowledge, while the Principles attempted to provide an alternative metaphysical framework, in contrast with scholastic philosophy, within which natural philosophy or a scien­ tific explanation of natural phenomena could be developed. Thus neither book ex­ plicitly presents a Cartesian theory of the mind nor does either give a detailed account of how, if dualism were accepted, mind and body would interact. The task of articulating such a theory was left to two further works, only one of which was completed by Descartes, viz. the Treatise on Man (published posthumously in 1664). The Treatise began with the following sentence, describing the hypothetical human beings who were to be explained in that work: 'These human beings will be com­ posed, as we are, of a soul and a body; and, first of all, I must describe the body for you separately; then, also separately, the soul; and fmally I must show you how these two natures would have to be joined and united to constitute human beings resembling us.