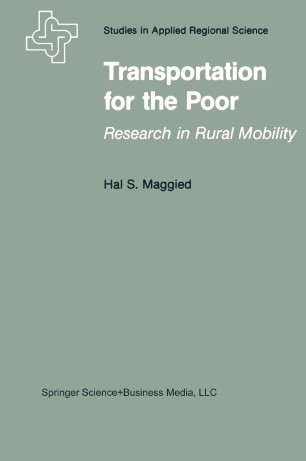 Transportation for the Poor

William E. Bivens, III For the first time in more than 160years, the nation's rural areas and small towns are growing faster than its metropolitan areas. The 1980Census of Population shows that the nonmetropolitan population increased by 15.4010 during the 1970s, while the metropolitan population grew by only 9.1010. During the 1960s, rural areas and small towns had lost some 2.8 million people to cities and their suburbs, but during the 1970s at least 4 million more people moved into nonmetropolitan areas than left them. This rural­ oriented population growth resulted from a number of factors, including a strong preference for rural and small-town living, the decentralization of manufacturing and related services,energyand other mining developments, William E. Bivens,Ill, isthe Senior Policy Fellowfor Rural Affairs ofthe National Gover­ nors' Association. He is a rural development generalist providing liaison between the gover­ nors and federal officials and performing applied policy research to support improvements in rural development programs and systems for their delivery. Mr. Bivenswas one of the designers of the Carter Administration's Small Community and Rural Development Policy and provided the implementation link involving the formation of governors' rural development councils. Mr. Bivens attended Brown University and did postgraduate work at the University of Texas, where he also taught American government and politics. xiii xiv FOREWORD and comparatively high rural birthrates along with improved infant mortal­ ity rates.