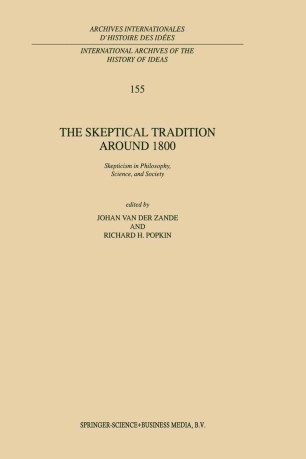 The Skeptical Tradition Around 1800

Skepticism in Philosophy, Science, and Society

In the early 1980s the late Charles B. Schmitt and I discussed the fact that so much new research and new interpretations were taking place concerning various areas of modem skepticism that we, as pioneers, ought to organize a conference where these new findings and outlooks could be presented and discussed. Charles and I had both visited the great library at Wolfenbiittel, and were most happy when the Herzog August Bibliothek agreed to host the first conference on the history of skepticism, in 1984 (published as Skepticism from the Renaissance to the Enlightenment, ed. R. H. Popkin and Charles B. Schmitt [Wiesbaden, 1987, Wolfenbiitteler For­ schungen, vol. 35]) Charles and I projected a series of later conferences, the first of which would deal with skepticism and irreligion in the seventeenth and eighteenth centuries. Unfortunately, however, Charles died suddenly in 1986, while lecturing in Padua. Subsequent to his death Constance Blackwell, his companion of many years, established the Foundation for Intellectual History to support research and publica­ tion on topics in the history of ideas that continued Schmitt's interests. One of the first ventures was to arrange and fund the already planned conference on skepticism and irreligion in the seventeenth and eighteenth centuries. After many difficulties and problems, the conference was sponsored and funded by the Foundation for Intel­ lectual History, one of its first public activities. It was held at the lovely facilities of the Netherlands Institute for Advanced Studies in Wassenaar in 1990.