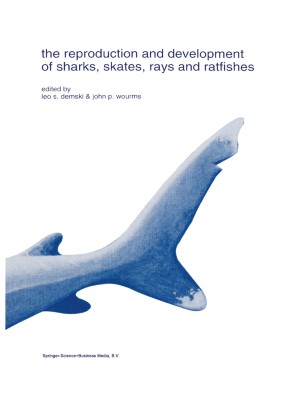 The reproduction and development of sharks, skates, rays and ratfishes

Part of the Developments in environmental biology of fishes book series (DEBF, volume 14)

This volume had its origin in a symposium on the Reproduction and Development of Cartilaginous Fishes that was held at the annual meetings of the American Elasmobranch Society and the American Society of Ichthyologists and Herpetologists in Charleston, South Carolina in 1990. The cartilaginous fishes, class Chondrichthyes, are a large and diverse group of fishes that include approximately 900 to 1100 living species of sharks, skates, rays and ratfishes. Throughout their history, which dates back at least 400 million years, they have been a successful major component of the marine ecosystem. The chondrichthyan fishes occupy a pivotal position in comparative and evolutionary studies of vertebrate reproduction and development. They are the oldest surviving group of jawed vertebrates and they possess both the adult vertebrate Bauplan and the vertebrate program of embryonic development. The major features of the female reproductive system, including its embryonic origin, structure, physiological function, and biochemistry, apparently were established early in vertebrate evolution and are fully developed in chondrichthyan fishes. These features of the female reproductive system have been retained during the evolution of the other classes of vertebrates. Much the same can be said for the male reproductive system. Moreover, viviparity, placental nourishment of developing embryos, and the hormonal regulation of these events made an initial appearance in this group. The 22 articles presented in this volume bring together a wide variety of complementary research by investigators from seven countries, allowing us to broaden the scope and implications of our studies while identifying opportunities for future research. The appearance of a volume on the reproduction and development of cartilaginous fishes is quite opportune. The continued existence of these fishes, which survived the great extinction events of Earth's history, is now threatened by overexploitation unless immediate steps for their conservation are undertaken. Knowledge of their reproduction and development not only is an end in itself, but is of critical importance in devising successful conservation and resource management strategies.