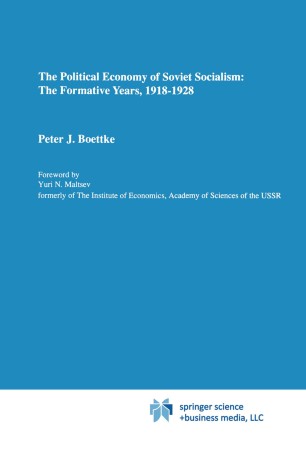 The Political Economy of Soviet Socialism: The Formative Years, 1918–1928

This book presents a narrative of one of the more interesting utopian experiments in comparative political and economic history: the first decade of the Soviet experience with socialism (1918-1928). Though historical and textual analysis, the book’s goal is to render this experience intelligible, to get at the meaning of the Soviet experience with socialism for comparative political economy today. The book examines the texts of Lenin, Bukharin, and other revolutionaries, as well as the interpretations of contemporary historians of the revolution and the writings of more recent interpreters of Soviet political and economic history.

Arguing that the first three years of the Bolshevik regime (1918-1921) constitute an attempt to carry out the Marxian ideal of comprehensive central planning, and that the disastrous results, which all commentators agree occurred, were the inevitable outcome of this Marxian ideal coming into conflict with the economic reality of the coordination problem that all economic systems face, the book draws clear conclusions and elucidates the air of mystery that often surrounds the subject.  Offering a radical challenge to contemporary comparative political economy at the level of high theory, applied research, and public policy, this book is appropriate for students and scholars interested in Marxism, economic history, political economy, and Austrian economics.