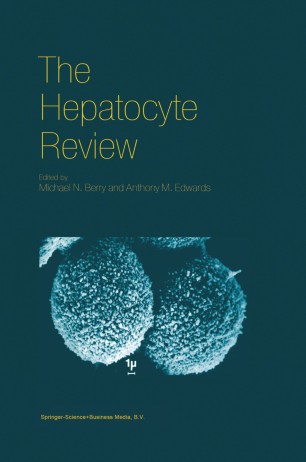 It is thirty years since the technique of high-yield preparation of isolated hepatocytes, by collagenase perfusion of the liver, was published. The original method described by Berry and Friend has undergone many minor modifications by other workers, and the two-step procedure introduced by Seglen in 1976 has become the most frequent way to prepare hepatocyte suspensions. An important development introduced by Bissell in 1973 was the use of the cells as the first step in monolayer culture. The availability of the isolated hepatocyte preparation as cells in suspension or culture has undoubtedly facilitated research on the liver. This was emphasised in our book, published (with Dr. Greg Barritt) in 1990, which described in detail methods of preparation and the properties of the isolated hepatocytes. It also discussed the usefulness of the preparation for the study of intermediary and xenobiotic metabolism, calcium ion transport, and the growth and differentiation of hepatocytes in culture. The book also touched briefly on a range of specialised techniques, including peri fusion, subcellular fractionation, transplantation, cryopreservation and measurement of intracellular pH. Although standard procedures for the manipulation of hepatocytes have not changed a great deal in ten years, they have undoubtedly been refined. This applies particularly to hepatocyte culture techniques, cryopreservation, and even to preparation of hepatocyte suspensions, where it is now feasible to use purified enzymes. There is also much more emphasis on the use and study of human hepatocytes, particularly in the field of pharmacology and therapeutics.