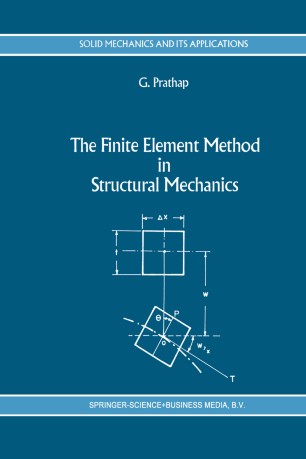 Part of the Solid Mechanics and Its Applications book series (SMIA, volume 24)

This book is not intended to be a text-book, delineating the full scope of finite element methodology, nor is it a comprehensive handbook of modern finite element practice for the finite element engineer. There are enough books that serve to do these and more. It is however intended as a monograph or treatise on a very specific area - the design of robust and accurate elements for applications in struc­ tural mechanics. It attempts to describe the epistemological conflict between the principles in finite element technology that can be described as Art and those that have a scientific basis invested in it and which can be admitted as science as the subject evolved and came to be accepted. The principles of structural mechanics as a branch of physics are well founded and have a sound scientific basis. The mathematical description of it has also a long history and is rigorously based on the infinitesimal and variational calculus. Of much more recent origin has been the branch of knowledge dealing with the numerical modelling of the beha­ viour of structural material. The most powerful method available to do this today is the finite element method. It is eminently suited to carry out the entire cycle of design and analysis of a structural configuration on a digital computer.