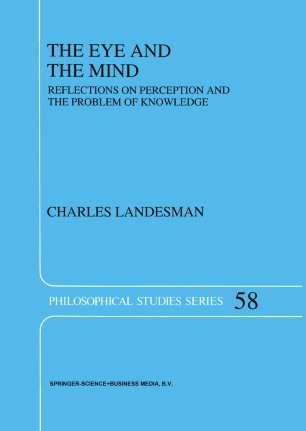 The Eye and the Mind

Reflections on Perception and the Problem of Knowledge

This book is a discussion of some of the major philosophical problems centering around the topic of sense perception and the foundations of human knowledge. It begins with a characterization of our common sense understanding of the role of the senses in the acquisition of belief, and it argues that scientific accounts of the processes of perception undermine salient parts of this understanding. The naive point of view of direct realism cannot be sustained in the light of a scientifically instructed understanding of perception. This critique of direct realism points to the correctness of the representative theory of perception characteristic of such early modem philosophers as Descartes and Locke, and it also endorses the subjective tum that they defended. It argues that these positions do not require introducing sense data into the picture, and thus it avoids the intractable problems that the sense datum philosophy introduces. In addition, several versions of cognitive accounts of sense perception are criticized with the result that it is unnecessary to characterize sensory processes in intentional terms. The book then turns to a leading question introduced into modem philosophy by Descartes and Locke, the question of the accuracy of the information delivered by the senses to our faculty of belief. In particular, how accurate are our representations of the secondary qualities? The case of color is considered in detail.