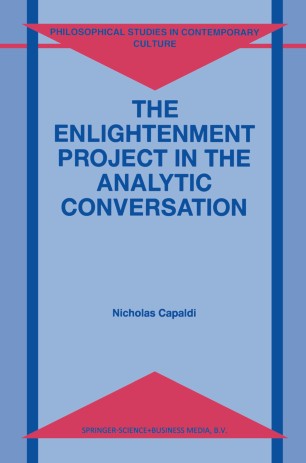 The Enlightenment Project in the Analytic Conversation

Analytic philosophy has been a dominant intellectual movement in the 20th century and a reflection of the cultural pre-eminence of scientism. In response to analytic philosophy's peculiar reticence (and inability) to discuss itself, this book provides its first comprehensive history and critique.
The central element in the analytic conversation has been the Enlightenment Project: the appeal to an autonomous human reason, freed of any higher authority and channeling itself through science as its privileged tool. This centrality is demonstrated by systematically examining its presence and development in the philosophy of science, metaphysics, epistemology, language, psychology, social science, ethics, political philosophy, and the history of philosophy. This journey highlights the internal logical disintegration of that project. Post-modern relativism is its natural offspring and not a viable alternative.
The Enlightenment Project's conception of physical science is defective; this defective conception of physical science renders the analytic conception of social science, philosophical psychology, and epistemology defective; and that defective conception of the human condition leads to defective conceptions of both moral and political philosophy, specifically the idea of social engineering or social technology.
Throughout the book, an alternative conception of philosophy is presented as a way out of the abyss of analysis, an alternative that reconnects philosophy with the mainstream of Western civilization and initiates the process of providing a coherent cultural narrative.
This book will be of particular interest to any sophisticated reader concerned about the lack of a coherent cultural narrative.