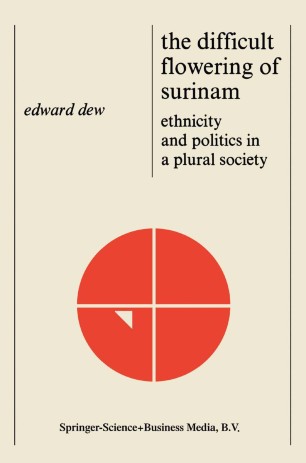 The Difficult Flowering of Surinam

Ethnicity and Politics in a Plural Society

In the months immediately preceding Surinam's independence, November 25, 1975, warning signals went up on both sides of the Atlantic. This small, ethnically plural society was torn by severe political conflict. Elections in November 1973 had brought an end to political collaboration between Creoles and Hindustanis, the country's two largest ethnic groups; and the Creoles, now in control of the government, were resolutely pushing (over Hindustani opposition) to sever their colonial ties with the Netherlands. But defections from the Creole benches during the summer of 1975 had produced a virtual stalemate in the legislature, heightening fears that the government would act unilaterally. The failure of Creole and Hindustani leaders to resolve their differences led many observers in both the Netherlands and Surinam to predict a collapse of democracy and/or violent conflict once independence was proclaimed. Ironically, the dramatic, last-minute resolution of the struggle precipitated not only general jubilation and relief, but also self-congratulation, as the leaders of Surinam's multiethnic society, long priding themselves on achieve­ ments in harmonious understanding, pulled out all stops in their indepen­ dence day oratory. No-one could forget the nightmare of the preceding few years. But neither could anyone familiar with Surinam's historical develop­ ment flatly reject the rhetoric as being without some foundation. In fact, Surinam, while severely tested by the most complex multi-ethnic population in the Caribbean, does have a record of which she can be proud and which deserves to be more widely known.