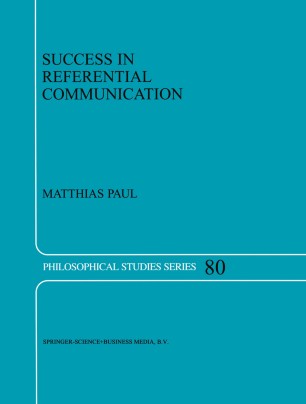 One of the most basic themes in the philosophy of language is referential uptake, viz., the question of what counts as properly `understanding' a referring act in communication. In this inquiry, the particular line pursued goes back to Strawson's work on re-identification, but the immediate influence is that of Gareth Evans. It is argued that traditional and recent proposals fail to account for success in referential communication. A novel account is developed, resembling Evans' account in combining an external success condition with a Fregean one. But, in contrast to Evans, greater emphasis is placed on the action-enabling side of communication. Further topics discussed include the role of mental states in accounting for communication, the impact of re-identification on the understanding of referring acts, and Donnellan's referential/attributive distinction.
Readership: Philosophers, cognitive scientists and semanticists.